Not to be confused with the debuff of the same name, or the consumable Astral Injection. 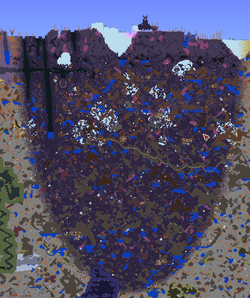 The parabolic shape of the Astral Infection biome, as viewed on the map in a large world.
The meteor can be seen in pink at the top-center of the biome, with the Astral Beacon pillar positioned to the right of it.

"This twisted dreamscape, surrounded by unnatural pillars under a dark and hazy sky."

The Astral Infection is a Hardmode biome added by the Calamity Mod. It crash-lands into the Dungeon side of the world via a meteor upon defeating the Wall of Flesh, which infects the nearby terrain and extends somewhat deep underground. The biome is filled with a sickly purple haze, and is populated by many alien creatures as well as dark monoliths of various sizes. It also contains a large Astral Monolith pillar, which houses an Astral Beacon on top of it. Players are alerted of the Astral Infection's arrival via a status message: "A star has fallen from the heavens!"

The meteor itself is made out of Astral Ore, which can only be mined after defeating the Astrum Deus boss. Tiles in a large area around and below the impact site are converted into Astral versions of themselves, including Astral Dirt, Astral Stone, Astral Sand, and Astral Ice, among others. Trees are converted into Astral Monoliths as well. However, the infection does not actively spread; only the initial impact converts tiles.

Two bosses, Astrum Aureus and Astrum Deus, can be summoned in this biome.

In Death Mode, the gravity here will be similar to the Space layer. This can be negated with a Gravity Normalizer Potion. The atmosphere will also appear to be hazier.

An Astral Infection meteor has a 100% chance of spawning after defeating the Wall of Flesh for the first time. After the first meteor has landed, defeating Astrum Aureus will always spawn a meteor in the world, assuming the limits have not been met yet.

No new meteors will fall if there are already a certain number of Astral Ore blocks above 0 depth. The limits are:

Alternatively, meteors will fall but not infect any nearby terrain if there are already a certain number of Astral-infected tiles in the world. Astral Ore blocks are not counted toward this total. The limits are:

16% of the world centered on the player's spawn point is protected from falling meteors. Meteors will not land within 25 tiles of a player, NPC, or a chest, nor directly on top of a platform.

The Astral infection hails from the depths of space, carried on the remains of corroded and broken planets. How those planets were destroyed remains a mystery, yet traces of dark matter tell tale of a chaotic force. Upon being shattered, fragments are scattered across the galaxy and collide with other celestial bodies. Wherever those meteors land, the surrounding ecosystems become modified, slowly twisting and warping to the infections will. This is all brought about by a single species of pathogen, carried by the meteor, and reformed by chaos to serve a new purpose. Gigantic monoliths of dark stone begin to rise from the ground. The trees rot away, replaced with pillar-like growths serving as further breeding grounds for the virus. Organic creatures are swiftly transformed beyond recognition as the microbe enters them and multiplies through their bodies, twisting them into self-mockeries that live and die to protect and spread the infection. The pillars exhale a thick violet haze that blankets the mutated land and permeates the system of any living being that wanders near, warping vision and stinging exposed flesh.

The virus’ control does not stop at the planet and its residents. If any entity is powerful enough to consume these infected planets, then they too are prey for the infection. Their entire astronomical body becomes a breeding ground for its new parasites. The original host may continue to travel the cosmos - but their purpose of existence is reduced to spreading the virus across the universe as yet another vector of the disease. All across the cosmos, brought about by the phage, these areas of infection are not uncommon. Many worlds have fallen to the virus, and grow dark, as the virus devours the planet to its core. As it continues to spread, it overrules any semblance to natural order. The weak become strong, the hunters the hunted. But in the end, the final result is a world turned into a nightmare for all, ruled by fear.