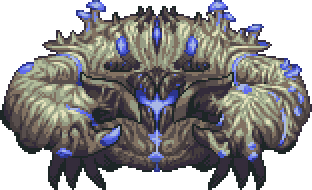 "A crab and its mushrooms, a love story."

Crabulon is a Pre-Hardmode boss. It has the appearance of a giant, grey, fungus-covered crab, with several glowing mushrooms attached to it.

Crabulon is summoned by using the Decapodita Sprout in a Glowing Mushroom biome.

When spawned, Crabulon will be passive towards the player, completely still and dealing no contact damage. While Crabulon is passive, the player is granted the Mushy buff, increasing defense by 5 and life regen by 1. It will become hostile if the player attacks it or after seven seconds have passed.

Once hostile, Crabulon will begin walking around and jumping at the player, all while firing series of mushroom projectiles. It also starts summoning small Crab Shroom minions, which slowly float downward while drifting towards the player.

Crabulon enrages outside of the Glowing Mushroom biome and on the Surface, increasing its running speed. The enrage is even more effective if both conditions are met.

Calamitas' legendary ocean incineration killed off countless creatures, boiling them alive or leaving them for dead in an inhospitable environment. The large but docile crabs that once roamed the ocean floor sought refuge underground; instinct guided them to the dank caves most resembling their former habitat...but it was simply not enough. The crabs perished in fields of luminescent mushrooms, their corpses becoming host to innumerable fungi. Only the barest scraps of meat remain in their parasite-ridden husks, compelled to move and feed even in death.