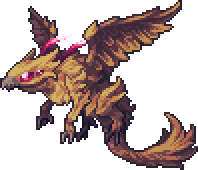 "A failure of twisted scientific ambition..."

The Dragonfolly is a post-Moon Lord boss fought in the Jungle.

It drops Effulgent Feathers, which are needed to craft the Dragon Egg, the item that summons Jungle Dragon, Yharon, as well as the Silva armor set.

The Dragonfolly can be spawned by the player using Exotic Pheromones in the Jungle.

The Bumblebirb[sic], created by Yharim in a failed experiment to engineer an army of lesser Yharon clones, was released into the Terraria Jungle to wander aimlessly and attack those strong enough to pose a threat to Yharim himself. They have the uncanny ability to replicate/reproduce with themselves in order to mass-produce more tiny Bumblebirbs that will eventually grow into larger birbs. The only thing preventing the birbs from overpopulating the entire Jungle is their engineered "hormonal reproduction limit" protocol. This protocol shuts down the birb's sexual hormones when there are a large amount of other birbs present near them, preventing the birbs from reproducing with themselves further.