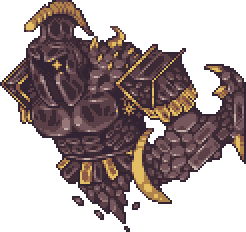 The Earth Elemental is a rare Hardmode mini boss found in the Underground and Cavern layers. Its method of attack is to fly toward the player while periodically charging. It will also occasionally fire blasts of rocks, which burst upon impact with blocks.

Due to its intimidating size, ability to phase through blocks, and immunity to all forms of knockback, it can be a dangerous encounter for unaware players.