The Calamity Mod adds several new biomes to the game, each with unique blocks, enemies, and collectibles. The mod also adds a variety of new structures, which provide the player with valuable items that are often difficult to obtain by normal means.

The Sunken Sea is a relatively peaceful biome located directly underneath the Underground Desert. It is comprised of Navystone and Eutrophic Sand, with several breeds of coral and many glowing Sea Prism crystals spread throughout. The biome is flooded almost entirely with water, however most of the wildlife present is harmless unless provoked, including the significant Giant Clam mini boss.

The Sulphurous Sea is a biome located at the edge of the world on the Dungeon side, which replaces the Ocean on world generation. It is comprised of Sulphurous Sand, turning the water poisonous and causing damaging acid bubbles to rise from the ground. The biome houses vicious wildlife that is challenging to deal with, especially during Pre-Hardmode. There is a hole at the bottom of the sea floor which leads into the Abyss.

The Abyss is an incredibly hazardous biome found underneath the Sulphurous Sea, composed mostly of Abyss Gravel and the deeper portions being made of Voidstone. The player will be killed in seconds, be it by the aggressive enemies or the intense water pressure, if they do not come prepared with proper equipment and stealth ability. Floating islands and wall protrusions can also be found in lower areas, housing Scoria Ore as well as locked Shadow Chests containing equipment to better explore the depths with.

The Brimstone Crag is a dangerous biome located at the leftmost end of The Underworld. It consists of several islands made of Brimstone Slag and Charred Ore, floating in the lava and in the air. These islands may also contain ruined houses with chests inside. This biome drastically increases in difficulty once Providence, the Profaned Goddess is defeated.

Upon defeating the Wall of Flesh and activating Hardmode (or upon defeating Astrum Aureus), an Astral Ore meteor crash-lands somewhere in the world and converts much of the terrain around it into Astral-infected blocks. The infected area is covered in a thick lavender haze, and dark monoliths sprout from the landscape. Many alien creatures spawn in this biome, all of which drop Stardust, a valuable Hardmode material.

On world generation, a floating island made from blocks that are the opposite of the world's Evil Biome will spawn somewhere in the world. On this island is a building containing a locked Biome Chest, like the ones found in the Dungeon, which is also of the opposite world evil. This structure acts as a means to obtain Crimson content in Corruption-infected worlds and vice versa, such as the Vampire Knives or Scourge of the Corruptor contained within the Biome Chest.

Ice Tombs are structures that can be found in Ice biomes. They are structurally identical to Desert Pyramids, although Ice Tombs are found underground, made of Ice Blocks, and contain valuable snow-related items within an unlocked Frozen Chest.

Shrines are small buildings dispersed throughout the world that are themed around a specific biome. Each will only generate in the biome from which they are themed. They contain incredibly powerful items to assist the player. 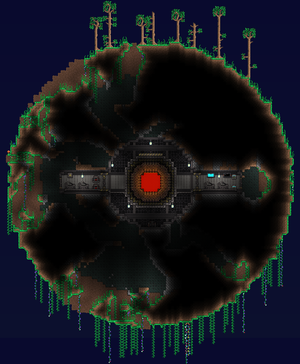 Planetoids are spheres of blocks added throughout Space containing various loot. They have multiple variants which provide their different and respective resources.