From Calamity Mod Wiki
(Redirected from Perforators)
Jump to: navigation, search
The Perforators 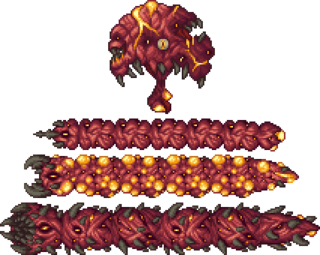 "An abomination of comingled flesh ... infested primarily by blood-slurping worms."

The Perforators are a group of Pre-Hardmode bosses fought in The Crimson. They consist of 3 worms with varying appearances and sizes, and a crimson, fleshy hive.

They are the Crimson counterpart to The Hive Mind.

The Perforators do not spawn on their own. The player can summon them manually with Bloody Worm Food or by killing a Perforator Cyst while in The Crimson.

The Perforator Hive will hover above the player, shooting projectiles and spawning Perforator worms from off-screen as it loses health. The Perforators all behave like typical worms, burrowing through blocks and charging at the player. The Perforators will also occasionally fire blood clots at the player from their body segments, which inflict the Burning Blood debuff. Each Perforator has different sizes, stats, appearances, and speeds.

The worms move progressively faster and have greater turning speeds as they lose health. If they're too far away from the player, they gain the ability to fly in order to return to the fight or reach an elevated platform more easily.

Leaving the Crimson biome will cause the Perforator Hive to enrage, making it invulnerable to all damage until the player returns. The worms will remain vulnerable, however.

Once a single large worm, the Perforators are separate entities that have lost the need for their eyes after evolving to live as a parasite inside the creature called the Brain of Cthulhu. If they lose their host, they burrow as a group to the depths of the crimson and wait for a new host to come across them. Unluckily for you, their new host is you.