From Calamity Mod Wiki
(Redirected from Plague Mine)
Jump to: navigation, search
The Plaguebringer Goliath 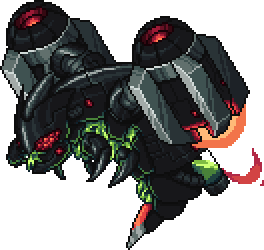 Map Icon
Not to be confused with Plaguebringer, a miniboss with similar AI.

"A horrific amalgam of steel, flesh, and infection."

The Plaguebringer Goliath is a Hardmode boss and the central force of the plague afflicted onto the Jungle after the Golem's defeat.

The Plaguebringer Goliath can be summoned manually with the Abombination. She must be summoned in the Jungle or Underground Jungle.

The Jungle Tyrant conducted a great number of projects and experiments during his rule. It was during one such experiment that Yharim and his researchers unwittingly created a terrible yet powerful weapon - infectious nanomachines capable of spreading to virtually any organic material that rotted the host from the inside out, sustaining the victim's life as they suffered to enable their proliferation. Yharim swiftly declared the results too dangerous for use and locked the bio-tech virus away under high security. However, one of Yharim's head scientists recovered the nanomachines from storage and silently added them to another of Yharim's projects as it was prepared for field use. Armed with a slew of advanced weaponry and filled with a sadistic disease, mechanized Queen Bees poisoned their hives as they were stationed throughout the Jungle.

Their lesser brethren contracted the plague and proceeded to spread it further still, cascading through the ecosystem in the blink of an eye. The outbreak was uncontrollable, the nanomachines impossible to purge from the cyborg insects without destroying them entirely. As the Jungle around him wasted away in agony, the tyrant king turned his eye to the devastating might of his living weapons. The mechanical abominations became known and feared as the Plaguebringers - capable of razing a thriving city to the ground with ordnance as easily as they could transform it into an apocalyptic wasteland. Though not the most powerful of Yharim's forces, the Plaguebringers promised their victims a gruesome, painful, and extremely slow demise.