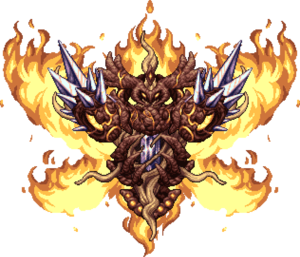 Providence, the Profaned Goddess is a post-Moon Lord boss fought in either The Hallow or The Underworld biomes.

Defeating Providence will provide the player with Divine Geodes, as well as the Rune of Kos used to summon the Sentinels of the Devourer. Additionally, Uelibloom Ore will generate in the world, and Calamitas, the Brimstone Elemental, the Ravager and Brimstone Crag enemies will be buffed and start to drop Bloodstone.

Providence does not spawn on her own and requires the player to summon her with the Profaned Core while in The Hallow or The Underworld biome. Unlike most bosses, Providence can only be summoned during the Day, and will despawn if it becomes nighttime.

If the player exits the Hallow or the Underworld for more than 5 seconds while fighting Providence, she will become completely immune to damage until they return.

However, in the Devourer’s and its servant’s mad search to consume her, such deeds are risky, and the scouring of a world is not an action which would escape its knowledge. Thus, Providence basks in the center of the sun, where she remains dormant, gathering power from the energy of the nuclear fusion. It is there that she waits, patient and dispassionate, to one day be able to descend upon the earth, consuming all in a purifying flame. Nothing would be able to withstand the heat of the Goddess, tempered by the sun, and fueled by a singular purpose. She would leave nothing but an uncanny, sinless world behind. However, if you were able to grasp one of her relics, a substantial core of her power, it would surely incite her wrath. She would descend unto the land prematurely, not having gathered enough energy, nor with her relic properly harnessed, leaving her weak. Her aim would be to reclaim her artifact, and annihilate the culprit. However, with proper exploitation of the method described, a skilled enough opponent could potentially destroy her in battle, to avert the fate of the world.