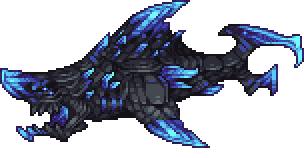 The Reaper Shark is a mini boss that spawns in the 3rd and 4th layers of the Abyss. It is initially stealthed as it hunts for prey, growling to indicate its presence. If approached or attacked by the player, the Reaper Shark will roar and enter an enraged state. Once enraged, it attempts to hurt the player by swimming directly into them.

At 50% HP, the Reaper Shark will briefly go invincible and roar, enraging further. It will then perform a series of faster, angled dash attacks, before resuming its prior behavior.

It can be detected with the Lifeform Analyzer.

On contact, the Reaper Shark inflicts the following debuffs: