From Calamity Mod Wiki
Jump to: navigation, search
The Dragonfolly 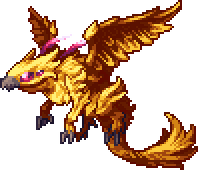 "A failure of twisted scientific ambition..."

The Dragonfolly is a post-Moon Lord boss fought in the Jungle.

It drops Effulgent Feathers, which are needed to craft the Dragon Egg, the item that summons Jungle Dragon, Yharon, as well as the Silva armor set.

The Dragonfolly can be spawned by the player using Exotic Pheromones in the Jungle.

The Dragonfolly is a very fast boss, often aligning itself vertically with the player to horizontally sweep across them. It will occasionally slow down and perform other attacks, including summoning projectiles around the player and spawning servants.

If the player moves at least 75 tiles away from the boss or exits the Jungle biome for at least 3 seconds, The Dragonfolly will each gain a level of enrage, gaining increased aggression and feather speed. If both conditions are met, the boss gains 65% more DR and causes two lightning pillars to summon when a Lightning Flare Orb is fired.

The Dragonfolly were born from a blunder of an experiment— one in which Yharim sought to replicate the might of his companion, the Jungle Dragon, for use in combat. The resulting folly are only a fraction of the size of their progenitor and entirely impossible to control. However, it is not the draconic magic within them that makes the folly a dilemma, but rather a side effect of the genetic process which created them. When introduced into a suitable environment such as the jungle, where the warmth and food greatly facilitate their reproductive process, they breed in excess, creating countless hatchlings. These young are known as draconic swarmlings, and fill the available territory, maturing quickly. There is a practical limit however as too many within a single area—such as the jungle—soon find competition, tearing each other to pieces in conflict.